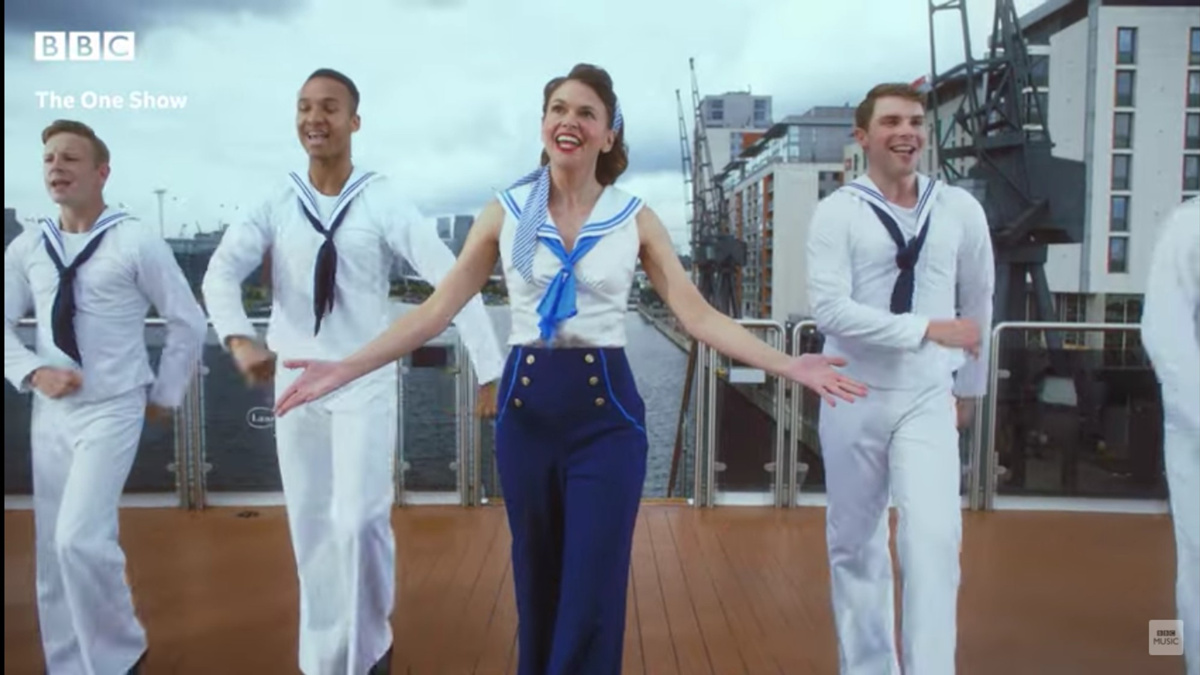 Odds & Ends: Get Wowed by Anything Goes Star Sutton Foster Singing and Tapping Ahead of London Bow

Board the S.S. Sutton Foster with New Performance
Tony winner Sutton Foster appeared on BBC’s The One Show to deliver a performance of the Anything Goes title number. As previously reported, Foster will reprise her Tony-winning performance as Reno Sweeney in the London revival of Anything Goes this summer. She replaces the previously announced Megan Mullally, who exited the production due to injury. Anything Goes, directed by Kathleen Marshall, will play London’s Barbican Theatre from July 23 through October 17. Enjoy the performance below!

Matthew Broderick & Uzo Aduba to Lead Netflix Series
Stage and screen stars Matthew Broderick and Uzo Aduba are joining forces. Variety reports that they are set for two of the lead roles in the Netflix drama Painkiller, a six-episode limited series about the origins of the opioid crisis in America. Broderick will star as Richard Sackler, scion of the billionaire Sackler family and senior executive at Purdue Pharma. Aduba will star as Edie, an investigator leading the case against Purdue. Micah Fitzerman-Blue and Noah Harpster will write and serve as showrunners and executive producers on the series. Patrick Radden Keefe, who wrote New Yorker’s The Family That Built An Empire of Pain and Barry Meier, the Pulitzer Prize-winning journalist and author of Pain Killer: An Empire of Deceit and the Origin of America’s Opioid Epidemic, will both consult. Their works serve as underlying material for the series, which aims to begin production in Toronto later this year.

Audra McDonald & More Join Stars in the House‘s First Live Show
In celebration of the return of Broadway, Seth Rudetsky and James Wesley will host a special live version of Stars in The House at the Town Hall in New York City on September 12. They will be joined by Audra McDonald, Andy Karl, Brian Stokes Mitchell, Kelli O’Hara, Orfeh, Adam Pascal, Chita Rivera, Jennifer Simard, Schele Williams and more. The evening will also be livestreamed here. On June 30, Stars in The House marked $1 million raised for The Actors Fund since the virtual show began in March 2020. “Seth and I are so excited to bring the show that we have been doing from our house for the past 16 months to The Town Hall in New York City, in front of a live and in-person audience,” Wesley said. “We’re going to look back at some of our favorite moments of the show with the artists actually on stage beside us and, of course, celebrate the return of Broadway with live performances—all while celebrating the work of everyone at The Actors Fund.”

Dates Announced for Broadway Cares Virtual 5K
This year, movers can once again run, walk, dance, bike, strut and twirl for an amazing cause. Broadway Cares/Equity Fights AIDS has opened registration for another virtual 5K, which can be completed anywhere and at your own pace. You can participate as an individual or in a group of fellow Broadway champions. The festivities kick into high gear on July 27 with a Zoom party for all fundraisers before the event on August 14 and 15. Everyone participating will fundraise to help those across the country affected by HIV/AIDS, COVID-19 and other critical illnesses receive meals and medication, health care and more.

Watch Orfeh & Terron Brooks’ Soulful Take on ‘Tomorrow’
Great things happen when golden vocals come together! Artist Terron Brooks released a solo single of “Tomorrow” from Annie in May from his forthcoming album The Soul of Broadway, due this fall. Now, he’s added Tony-nominated powerhouse Orfeh to the mix, turning the musical theater classic into a soulful duet. Check it out below!

Bryant Park Movie Nights to Include Films That Inspired Shows
A few films have been announced for this summer’s Bryant Park Movie Nights series, which will be returning this summer after being paused due to the pandemic. They will run on Monday and, for the first time, Tuesday evenings, from August 23 through September 28 on the Bryant Park lawn. All films begin at sunset, with the lawn open at 5PM ET for picnicking. The lineup will include screenings of three films that have productions returning to Broadway this fall. These screenings will include special surprise guest appearances and be part of the inaugural Bryant Park Broadway to Film series. Moulin Rouge!, starring Ewan McGregor and Nicole Kidman, will screen on September 14. The Phantom of the Opera, the film version of the longest-running show in Broadway history, starring Gerard Butler, Emmy Rossum and Patrick Wilson, will be on September 27. Mrs. Doubtfire, starring Robin Williams and Sally Field, will screen on September 28. The full Bryant Park Movie Nights lineup will be announced at a later date.