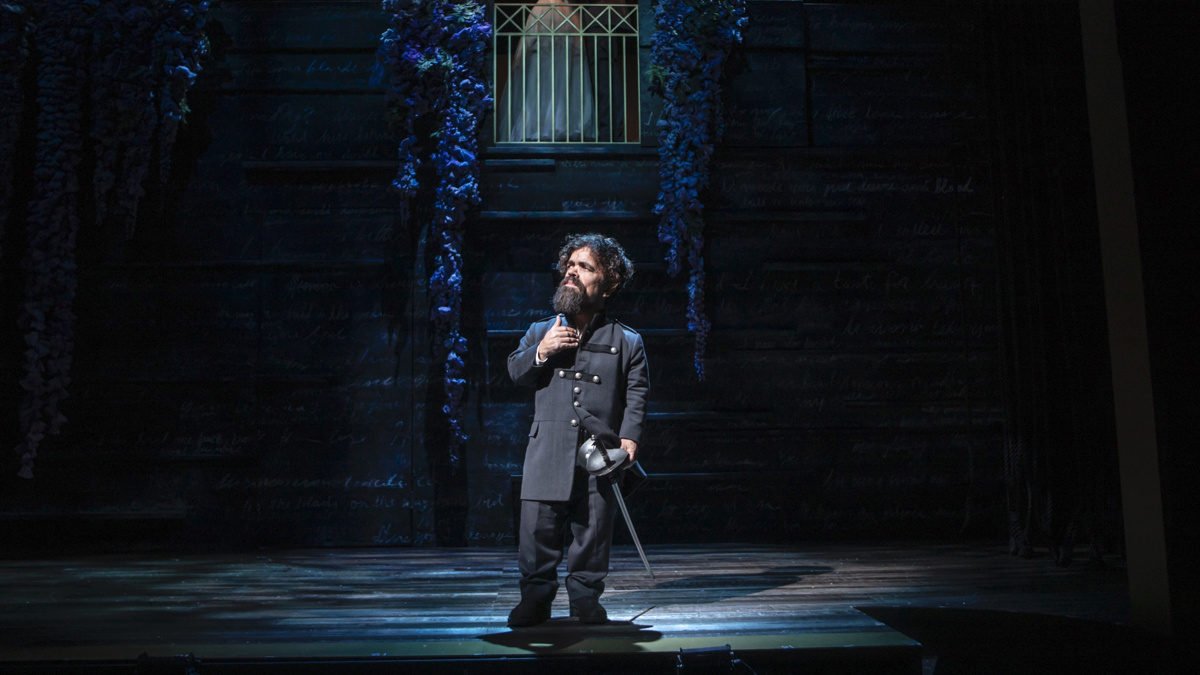 Cyrano Musical, Starring Peter Dinklage, to Become Feature Film
Emmy winner and stage veteran Peter Dinklage will reprise his titular role in a film adaptation of Cyrano. Deadline reports that Haley Bennett will return to the role of love interest Roxanne, which she played alongside him at the Goodspeed Opera House’s Norma Terris Theatre in 2018. Tony nominee Brian Tyree Henry and Ben Mendelsohn will also star in the movie, which will be directed by Joe Wright. The musical most recently played off-Broadway at the Daryl Roth Theatre in 2019 and is written by director, writer and stage actress Erica Schmidt, who is also Dinklage’s wife. Cyrano is adapted from Edmond Rostand’s Cyrano de Bergerac. Schmidt wrote the libretto; the music is by The National’s Aaron Dessner and Bryce Dessner, with lyrics by Matt Berninger (also from The National) and Carin Besser, who has contributed to many of the band’s songs. A production timeline for the film will be announced later.

Stream of BD Wong’s Songs from an Unmade Bed to Benefit BC/EFA
A slew of starry special guests are lined up for Tony Award winner BD Wong and videographer Richert Schnorr’s imaginative video interpretation of the theatrical song cycle Songs from an Unmade Bed. The collection of immersive music videos will stream here at 8:00PM ET on August 10 as a benefit for Broadway Cares/Equity Fights AIDS. Special guest hosts for the stream will include Billy Porter and Keala Settle, Awkwafina, John Lithgow and John Cameron Mitchell. There will be featured appearances by Maulik Pancholy, Bowen Yang, Raymond J. Lee, Telly Leung, Jose Llana and more.

Esteemed Scribe & Educator Eric Bentley Dies at 103
Eric Bentley, who lent his writing talents as an author, playwright and influential theater critic, passed away at the age of 103 on August 5. The New York Times reports that he died at his home in Manhattan. Born in Lancashire on September 14, 1916, he went on to study at the University of Oxford and Yale University. He started teaching at Columbia University in 1953 and also served as the theater critic for The New Republic. He also had bylines at The Nation, Theatre Arts, The Times Literary Supplement in London and The New York Times throughout his career. His many published criticism collections include The Playwright As Thinker, In Search of Theater, What Is Theater?, The Life of the Drama and many more; his plays included Are You Now Or Have You Ever Been: The Investigations of Show-Business by the Un-American Activities Committee 1947–1958, Lord Alfred’s Lover, H for Hamlet, German Requiem and more. He directed the German-language premiere of Eugene O’Neill’s The Iceman Cometh. He worshipped Bertolt Brecht and translated his works extensively. Bentley was inducted into the American Theatre Hall of Fame in 1998 and received an Obie for Lifetime Achievement in 2006. After being married twice, Bentley came out in the late 1960s and lived openly as a gay man. He is survived by his sons Philip and Eric Jr., as well as four grandchildren.

Hear from Alex Lacamoire & Corey Cott
We just figured out your quarantine weekend plans! Tony, Grammy and Emmy-winning music man Alex Lacamoire will be hosting a live virtual Q&A with fans on August 7 beginning at 5PM ET as part of Broadway Banter’s Broadway Banter: Safer-At-Home series. Corey Cott will be hosting one on August 9 beginning at 1PM ET. Interested in taking part? Head here! Fun fact: for every 25 tickets sold, Broadway Fantasy Camp will donate a ticket to a hospital worker.

A Who’s the Boss? Sequel Series Is in the Works
Broadway alum Tony Danza is on board to reprise his iconic role as Tony Micelli in a Who’s the Boss? sequel series. According to Deadline, the reboot is currently in development at Sony Pictures Television. Alyssa Milano, who portrayed Danza’s daughter Samantha in the series, is also signed on. Does this mean audiences of the beloved TV comedy get to experience more of Judith Light‘s iconic fashion as ad exec Angela Bower? Watch this space!

Watch Bryan Cranston in the Trailer for Your Honor
Showtime’s new series Your Honor stars two-time Tony winner Bryan Cranston as a respected judge whose son is involved in a hit-and-run that leads to a high-stakes game of lies, deceit and impossible choices. A release date for the series has not yet been announced. Watch the gripping trailer below!