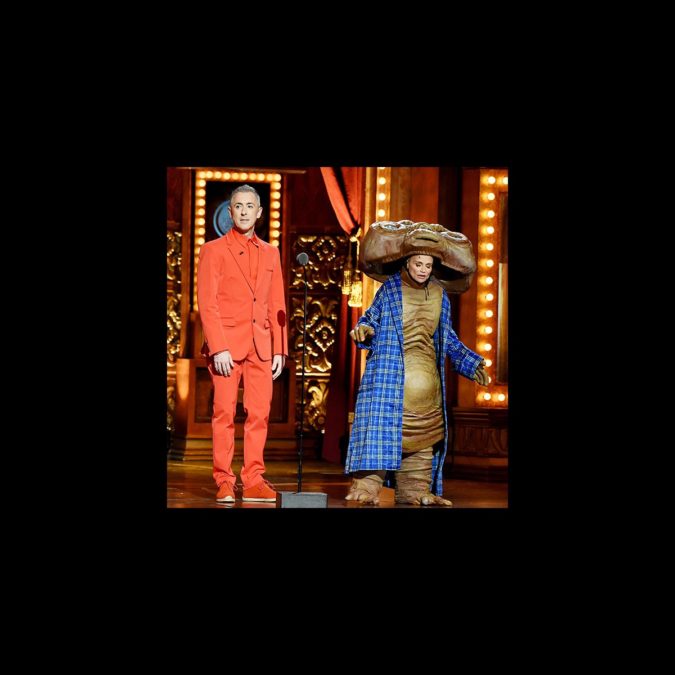 Nothing Says Swanky Like No Pants
Kristin and Alan kicked off the night with snazzy style. She was dressed in a sexy Chicago-esque black tuxedo jacket dress and he showed off his…um…knobby knees in an eggplant-hued short suit. Well, at least we knew were in for a lighthearted evening.

Shakespeare Chic Is In This Season
After Something Rotten! Tony nominees Brad Oscar and Brian d'Arcy James performed "A Musical," the co-hosts wanted to see what all the Renaissance fashion fuss was about. Alan seemed to ditch the traditional codpiece in favor of his purple shorts, but they still looked like they'd fit in with Shakespeare and his posse.

I Keep A Cheno Under My Hoop Skirt
Alan and Kristin swapped gender roles while spoofing the Tony-winning revival of The King and I. Alan looked splendid in the iconic "Shall We Dance?" dress and Cheno emerged from under his petticoat in a hilariously bad bald cap and King of Siam garb. Even presenter Rose Byrne could barely contain herself.

Dance To Your Own Tommy Tune
Alan and Kristin switched back to straight-up classy during a tribute to Tommy Tune, who received the Lifetime Achievement Tony. Kristin looked smashing in her red satin Oscar de la Renta dress and Alan embraced the modern day cabaret style with his metallic blue lounge jacket. Smokin' hot.

From A Whole ‘Nother World
Immediately after Fun Home Tony nominee Sydney Lucas brought everyone to tears with her "Ring of Keys" performance, Kristin joined Alan on stage in an—wait for it—E.T. costume. First, we thought, "WTF?" and then Alan explained: "I said Fun Home. Not phone home." Well…it was out of this world, that's for sure.